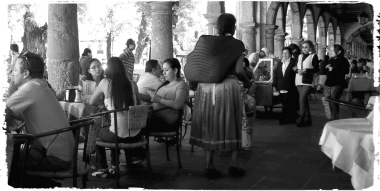 LET’S TAKE a brief break from tossing darts at America’s politics, its unraveling society, Barry Obama and diminishing liberties. It’s time to gloat because I live down here, and you do not, or probably not because most Moon fans* live above the Rio Bravo.

Life here is good. It is not dangerous — fraught with peril — as many would have you think. It is peaceful, fun, colorful and inexpensive.

Let’s take yesterday, for example. Our young nephew, age 10, had spent the night with us. He has no bathtub where he lives, just a shower stall, and he loves filling our huge tub with hot water, getting in and hooting and hollering for about an hour.

He does this on the evening he arrives. He does it again the following morning. If he spends another night, that means two more sessions in what amounts to his swimming hole.

And we always eat waffles in the morning when he’s here. He and I are big waffle fans.

But let’s get back to yesterday. It was a sunny Sunday with cool temps. We drove downtown to eat lunch on the big plaza, a sidewalk table like in Paris. But people weren’t speaking French. They spoke Spanish. There were lots of Mexican tourists.

We dropped the kid off with his mama, and my child bride and I crossed the plaza and found a sidewalk table at this good restaurant. We both ordered arrachera, medium-rare. It came with guacamole, beans and warm tortillas.

I took the photo at the top just for you.

*And I love you. Never think otherwise.

34 thoughts on “Pause for Mexico”