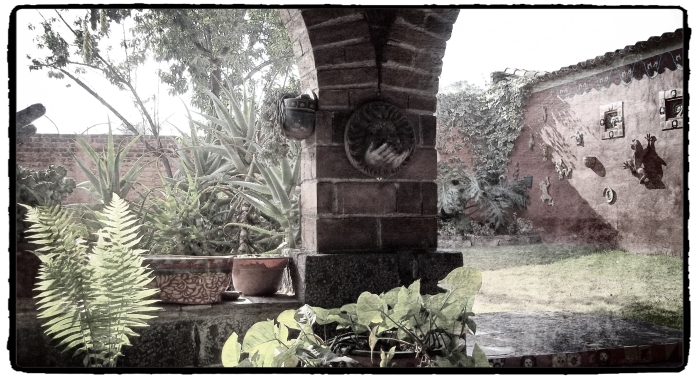 IT RAINED YESTERDAY, which it should not have. April showers isn’t an expression that normally applies to our Mexican mountaintop. April drought is more like it. The forecast says it’ll do it again today, but the sky is blue so far.

I used to dread Springtime rain because it — unless brief — would rouse the lawn, and that would require mowing that big baby. But since I quit mowing a couple of years ago, it doesn’t matter if it rains. Our yardman, the dour Abel, just makes a bit of money.

Easter Week ended. That’s a big deal here, the resurrection of Jesus, so I mostly avoid it. Mobs of tourists arrive downtown. There’s a big artisan market on the plaza, and some of my Mexican relatives come visit. Fortunately, they stay downtown with my child bride’s sister or we let a chosen few stay in our downtown casita. The boozers, chain smokers, cheats, children and irresponsible can sleep elsewhere.

This year we gave the casita keys to a favored niece, about age 30 and married a year; her husband, a very nice fellow; and the niece’s papa, a good guy, and stepmother, whom I do not know. Four people, we thought. Of course, Mexicans often arrive with hordes of human baggage, and the papa and stepmother showed up, without warning, with their other two adult children.

None proved to be boozers, chain smokers, cheats or irresponsible, so it was okay. The casita has only a queen bed and a double bed, so God knows where they all slept. There was a small, fold-out mattress in a closet, leaving just one bedless. Probably snoozed on the sofa.

They were there only two nights, and they left yesterday afternoon. Later we passed by the casita and found it spic and span, which is how we like to find it after guests depart. There were neither cigarette butts nor dead bodies.

Next week we’ll be enjoying the Pacific beach at Zihuatenejo. Most Mexicans will be back at work or in school, so we should have the place pretty much to ourselves, which is how I like it. It’s a slightly late anniversary jaunt. We hit the 12-year point just two days ago.

This morning, under blue skies and enveloped in cool air and optimism, we walked our usual exercise laps around the neighborhood plaza. On returning, we sat a spell in the downstairs terraza with orange juice and grapefruit. That’s when I snapped the photo above.

23 thoughts on “News of Springtime”