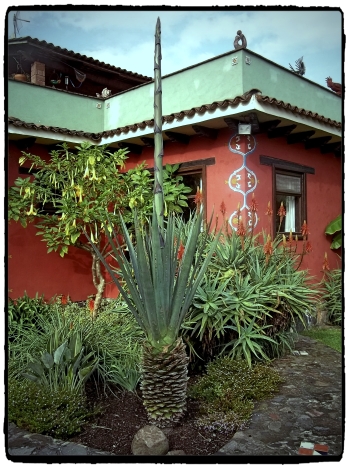 IT’S AUGUST, and an old man’s fancy turns to stuff of the earth.

Sometimes that stuff gets directly in our faces. When we came back from Mexico City last week, gone just four days, this tequila maguey had quite the stiffie.

That entire stalk appeared over those four days. For perspective, know that the regular spiked fronds circling below are over six feet from the ground.

This baby means business. The pole in the middle must rise about 14 feet or so.

Alas, it spells death for the plant, which I stuck into the dirt years ago when it was about eight inches tall. After poling up, so to speak, the plant has done its work, whatever that is, here on Earth. It dies.

This is the second time we’ve had a tequila maguey do this, so I have experience. I had heard that the plant dies after sporting its woodie, but I did not know it took so long to die. Mostly, it just sits there, looking woebegone. Finally, after a year or two, I had the first one uprooted, which is amazingly easy, and toted away. Before uprooting, it’s best to saw off the boner. Ouch!

That will be this plant’s fate too. There is one more in the yard, younger, and it will do the same one day, and that will be the end of it. I will plant no more. They are a hassle anyway, with those constantly sprouting swords.

August heads toward its finale. When September arrives, the end of the rainy season will be in sight. Normally, it dribbles a bit into October and then stops. November is our most beautiful month. It’s when you should visit.