EVERY YEAR around this time I start to think of butchery.

The yard goes berserk every summer, you see, and as frigid winter arrives — it often freezes — things flip entirely in the other direction, leaving much of the yard dead, brown and butt-ugly. 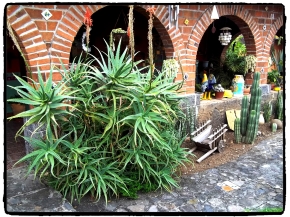 Some things you can just ignore, like the grass, but others must be dealt with. Topping this list are the three stands of banana trees, which must be whacked back.

The fan palm, which grows taller every year, must be trimmed. I think this season I’ll need a ladder, a first.

The two datura trees get cut back severely, but that’s pretty easy because they are very soft wood. The loquat tree is attacked, and there are two stands of some plant that grows wildly from bulbs.

I just eliminated one of the two this morning. Perhaps the second will fall tomorrow.

I’ll get Abel the deadpan neighbor who cuts the grass all summer to dig up this aloe vera bush you see in the photo. It’s gotten too big for its britches, elbowing way over onto the sidewalk.

We’ll still be prepared for the occasional burn in the kitchen, first-aid-wise, because there are three other stands of aloe vera in the yard. But they’re not butting onto a sidewalk, not bothering anybody at all. 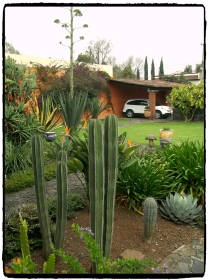 Well into our 11th year at the Hacienda, the yard is big and beefy, not like the starter environment of 2003 when I cared for all with little effort.

Now, much has gone totally out of control, and I let it be.

I’ve long been a cactus man and could be happy living in the desert. Cacti did not feel at home at my house in humid Houston, back in the 1990s. That’s not the case here.

Look at these pole cacti. I planted a couple when they were just little tykes. They have multiplied, and are almost as tall as I am.

What you see farther back is a maguey that has shot up its death tree. When it “flowers,” it’s the last gasp, its death rattle. It will die, but it takes quite a long time to do that. In the meantime, it’s a conversation piece.

That’s all for now. It’s time to go downstairs and eat cereal. Then I’ll shave, bath and dress, drive to the market by the train station and buy tangerines. It’s the season. I’m a tangerine man.

16 thoughts on “Cuttings of November”