THE BOYS have been here for a month now, arriving every morning before 8:30., building the pastry workshop as my lovely wife has chosen to call it, not the kitchen, not the storefront.

The music is theirs, blaring from a dusty boombox nearby. A Mexican construction project requires music, always. The size of the crew varies, but usually it’s just these two because Ramón the honcho is also building the new courthouse downtown, and a courthouse outranks a pastry workshop.

Ramón told me it should all be finished in another week. Due to Christmas, I am skeptical. I’ve also decided to paint the entire façade of the Hacienda property, what you see out on the street. We will be so pretty. 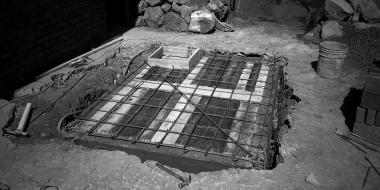 Just a couple of hours after the video was shot, the septic tank roof had been covered with boards — supported from below by parts of trees — and rebar laced atop the wood. There’s an opening at the top left of the tank.

And then just an hour or so later, the entire shebang was covered in cement. 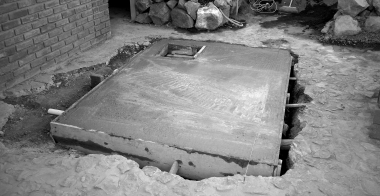 As always, a blow by blow photo spread of the construction can be found here.

And the previous post about this matter can be found here.