I WORKED AT The Houston Chronicle for 15 years, the tail of my newspaper “career,” but I arrived there in a circular manner.

From New Orleans, I headed to the San Antonio Express-News, but I only stayed about four months. Loved the city. Hated the job or, more accurately, hated my boss. From the Express-News, I traveled to the Houston Post, but I resigned that job six months later.

The Post was the No. 2 paper in a two-paper town, and No. 2 papers were folding around the nation. I wanted a place to stay put, so I applied across town at the Houston Chronicle. I had a friend there who put in a good word for me. The news editor — and later assistant managing editor — who hired me was a big, ole, good-natured Mexican-American from Laredo who was also gay.

Fernando. More on him later.

At the time, the Houston Chronicle was one of the top 10 newspapers in America, circulation-wise. It’s not anymore because times have changed, and people have quit reading newspapers, which has made them more ignorant. It’s said we get our news online now, but I think that we’ve simply quit reading news. We do social media instead, which is gossip and chitchat.

Bodes very ill for America. But it bodes well for Mohammedans.

I decided to settle down. I got married to the woman I’d lived with for seven years. Her name is Julie. We bought a ranch house in the inner suburbs of town. The house cost just $86,000 and now it’s worth three times that. It was in my name when we divorced nine years later, and I gave it to my ex-wife after the divorce was final, a parting gift. How about that? She still lives there.

The Houston Chronicle newsroom is the size of a football field. The horseshoe copydesk, of course, was long gone, and we sat, side by side, at desks with computer terminals, editing stories, writing headlines, doing page designs, often in a rush, often with feet on the desk, especially mine.

The industry — and an industry it is — was changing rapidly. From being the male-dominated, liquor-bottle-in-desk-drawers, expletive-laced, bleary-eyed, fun, crackpot game of old, it became feminized, career-fixated and politically correct up the kazoo.

Fernando, the news editor who hired me, became assistant managing editor, the boss over all copydesk operations. He was a prince of political correctness and, amazingly, the only person I’ve ever known who readily admitted being politically correct. Ninety-nine percent of PC fanatics will give you a blank stare and deny ever having heard the term.

It’s like a Nazi seeing the swastika on his armband and saying, “What’s that about?”

Anything that sniffed of “offense” toward any “oppressed, victimized” group would bring immediate consequences. Even women in bathing suits on beaches vanished from our pages. Sexism!  This was not all Fernando’s doing.

Feminist zealots had contaminated the newsroom.

The sort of people in the business was changing. They were young careerists. To look at them, you might have thought you were in an insurance company’s office. My coworkers became tidy, bright-eyed and very ambitious. And you couldn’t walk in off the street and get hired. Degrees in journalism were de rigueur. Even higher levels of formal schooling was viewed very positively.

Watergate initiated much of this. What before was a traveling tinker trade became an honored and competitive calling. Bringing down a president can be very heady stuff.

Everybody wanted in. Journalism schools mushroomed after Nixon.

Youngsters did not just want in. They wanted to investigate! They wanted Pulitzers! And thus began the micro-examination of the private lives of public and wannabe public officials, something the internet made far easier than it used to be. Anyone who runs for high office today is out of his mind, in my opinion. You’ll be dragged through the dirt.

Except if you’re a member of an “oppressed” minority, which put you-know-who into the Oval Office.

END OF THE LINE

The Houston Chronicle’s policy allowed early retirement if you’d reached age 55 and had been employed 15 years. I hit those two markers almost simultaneously in 1999. I had been divorced five years, and I was debt-free. I waved goodbye.

My newspaper days began at the tail of one fascinating, gluepot, highball era and terminated at the beginning of a new boring, careerist, internet world which I was very happy to leave.

My timing was perfect. The Chronicle’s circulation, like most big newspapers across America, has declined. The newsroom suffered lots of layoffs after I left. Friends found themselves out on the street. The paper’s now working hard on its website while, no doubt, praying at the same time.

This is the third and final segment in a series called Newspaper Days. The two other engaging segments are San Juan and New Orleans.

(While my newspaper life was spent primarily at the The New Orleans States-Item, The Times-Picayune, The San Juan Star and the Houston Chronicle, I also spent brief moments — just months each — at the San Antonio Express-News, The Houston Post and the Florida Times-Union.)

(Note: Fernando, basically a great guy in spite of his being on the wrong side of the culture war, retired about the same moment that I did. He went on to become a playwright and was once interviewed on Fox News’ Glenn Beck show after the debut of Fernando’s play about Tammy Faye Bakker, a gay icon. When my wife and I visited Houston about a decade ago, the three of us had a nice coffee shop visit, conversing in Spanish. I was happy to see him.

(Fernando and I were Facebook amigos until my incessant railing against illegal immigration became too much for his open-borders, PC sensibilities, and he zapped me from his FB friend list. I’ve heard nothing from him in the years since, which saddens me. I sort of admire his rare willingness to admit his political correctness beliefs. That requires pelotas.) 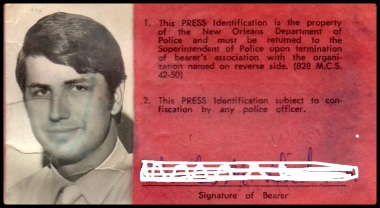