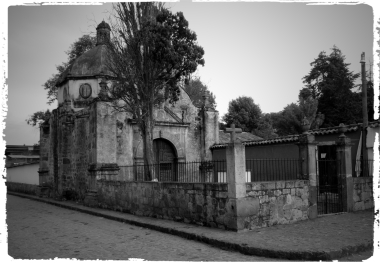 PACHELBEL’S CANON played as we ate bagels and Philly cheese lite this morning. The dining room window to the terraza was open to enjoy the 58-degree air in almost-August under blue skies at 8 a.m.

I took the photo with my new camera yesterday. It’s a 16th-century church on the outskirts of town, little visited and usually locked. I have read that Spaniards tortured an influential Indian chief in there. Racist Latinos!*

I’ve been inching through the manual of my new Canon SX520 and, as usual, sighing and rolling my eyeballs at how much technology can be crammed into a small space these days. Whereas I am in favor of high technology, my enthusiasm wanes when I have to deal with its innards personally.

The first day after the camera’s arrival discouraged me. I only wanted a far better zoom, and simpler cameras with great zooms are available. I began to wonder why I had not purchased one of those simpler options.

I woke up for a spell in the middle of Thursday night, thinking: I’m gonna sell that thing and buy something easier.  I have pulled similar stunts.

About three years ago, I bought a Samsung Smartphone. I sold it at a significant loss within the week. Didn’t care for it. My main objection was the ringtone, which was too pissant for my tastes. Didn’t ring long enough. Yeah, I know. You can add others. Learned that later.

I returned to my previous, ancient, Nokia phone. You would laugh at it. It does two things only. It makes calls. It sends messages. Period. It does have powerful ringtones that would startle the dead.

Back to the camera. So I woke up yesterday and continued reading the Canon manual (online) while fiddling with the camera. I began to like stuff more and more. It’s pretty incredible, things it does. I stood on the upstairs terraza and took a closeup of the chimney on a house down the street, crystal clear. No wobble at all. How’s that possible?

I also removed the neck strap, which was a colossal annoyance. I went back to Amazon, the U.S. version this time, and ordered a perfect wrist strap and a beefier memory card. They are en route, no import tax due, I’m told.

Looks like I’ll keep the camera. I took it downtown yesterday afternoon for my daily coffee siesta at a sidewalk table facing the beautiful plaza with towering trees. I snapped a few shots, but nothing notable. Then I got in the Honda and drove home, passing the small church above.

We finished the bagels and Philly cheese lite. I watered the plants on the downstairs terraza. It’s a lovely day. I wonder what kind of day it was when the Spaniards tortured the Indian chief in the church.

Maybe there are still blood stains on the stone floor. Maybe that’s why the church is usually locked. Catholic shame.

* Don’t they know that #indianlivesmatter?

15 thoughts on “Music and bread”