SITTING ON the big plaza eating a cupcake I purchased from the bakery just back of the concrete bench where I was perched, I watched the hula hoop girls yesterday.

Purple banners are going up around the plaza in preparation for Semana Santa, Holy Week, which is a big deal around here, almost as big — or HUGE, as  Donald Trump would say –as Los Muertos, the Day of the Dead. 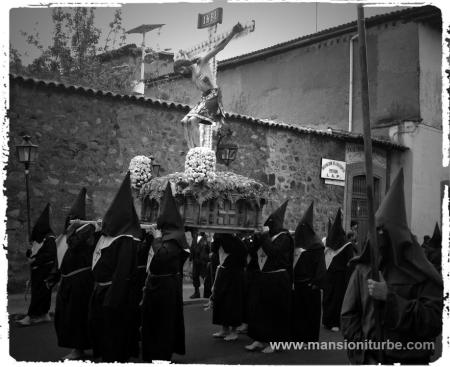 There are a number of religious processions downtown during Holy Week, and my favorite is the Procession of Silence, which passes by silently, as advertised. That’s it in the photo, another year, and, yes, they dress up like Klansmen.

But we’ll be missing that parade this year because part of next week will find us in the Gringo-infested town of San Miguel de Allende. I’ll be visiting the consular office to renew my U.S. passport, a passport I don’t anticipate ever needing again, but it’s a habit I cannot seem to break.

We’ll be staying downtown at the Hotel Quinta Loreto. It will be our first stay at that hotel.

While Friday will be spent renewing the passport, on Saturday we’ll be visiting with an old friend whom I’ve not seen in 15 years, the psychologist who stitched my heart back together after my last divorce in the mid-1990s.

He’s visiting San Miguel for only four days, his first trip there. He lives in Austin, Texas.

But that is next week. This week — today, actually — we’re having a birthday party at the Hacienda. Our nephew, the lad once known as the Little Vaquero — turns 13. It seems like only yesterday that he was brought home from the hospital with those huge ears that look quite normal now.

And there you have it: hula hoop girls, Holy Week, San Miguel de Allende and the birthday party.

It’s just one thing after another.