I WAS RAISED in north Florida, Jacksonville, where I lived throughout the 1950s and on into the 1960s. I graduated from high school in 1962, and left the state forever.

That’s me and my sister, Diane, sitting on the bentwood bench in the back yard of our home in the Jacksonville suburb of Arlington, across the St. John’s River.

I don’t know why we were dolled up like that. It likely was Easter Sunday, and my paternal grandparents must have come to town. Otherwise, we would have ignored Easter because my parents were socialist agnostics, usually.

But when my father’s parents were around, we were upstanding citizens, good churchgoers, teetotalers. My father hid his booze bottles. Paternal grandfather was a Baptist deacon, and grandma was a Methodist.

Around them, we were another family altogether. 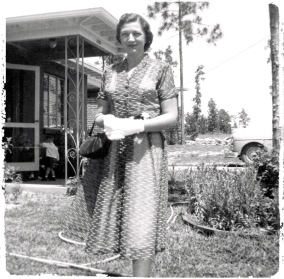 Here’s my mother, Virginia. She died in 2009 at age 90, but she would have been about 38 here. I wonder if her Miltowns were in the purse or on the kitchen window ledge, which is where she usually kept them for easy access.

Our green 1950 Dodge is parked in the driveway. I have no idea who those rug-rats are who are opening the screen door. Probably kids of the Dawsons who lived next door.

My sister towered six-feet-tall in high school and had just one date the entire time. I wonder if that was when she began her spiral down the road where she ended up decades later as a militant, explosive, feminist, lesbian fanatic?

But she was very nice when she was young. She was smart and kind and reasonable. I miss that sister.

An American family of the 1950s. You never know what hides behind the Easter Sunday smiles and lies.

13 thoughts on “A Florida childhood”