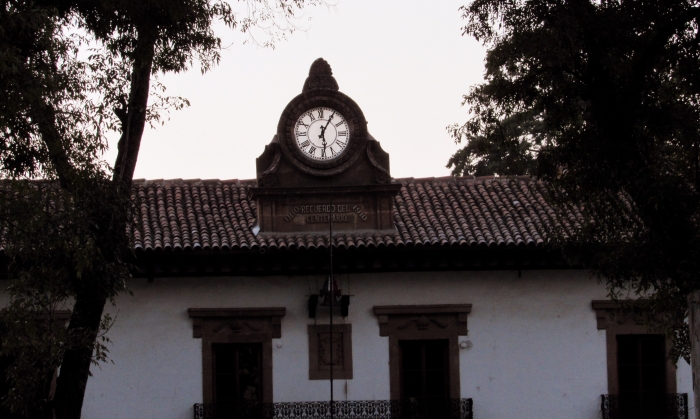 IT FROZE at the Hacienda Monday night. A little birdie told me, or rather a little birdie bath. That’s the most obvious sign of an overnight freeze, the talavera birdbath on the Jesus Patio freezes over.

Another clue is frost on the grass.

This does not make me happy. Just because I loathe heat, and that being one of the main reasons I chose to end my life here on the mountaintop, does not mean that shivering pastes a smile on my face. It does not.

The cold does serve one fine purpose. It keeps the Gringos from moving here, or rather it used to, or seemed to. It doesn’t appear to be working so well these last few years because more and more have followed me here to altitude.

The Gringos are a hoot. Yeah, I know I used to be one, but I’m less so now than before even though I make a really lousy Mexican. Caught somewhere in the middle, a sort of weirdo limbo.

Late yesterday afternoon I was sitting at a sidewalk table on the big plaza, as I often do, with a nice café Americano negro when a couple of Gringo tourists walked by. Maybe they were Canucks. They all look alike.

I was bundled up with a jacket and scarf, wishing I had gloves, and this goofy pair walks by in shorts, tank tops and flip-flops. I doubt they did that intentionally. I suspect it’s the only sort of clothing they brought.

After finishing my café, I walked around the plaza, investigating the extensive street renovation that’s under way that will take months. I took the photo during that unscheduled scroll. As you can see, it was just after 6 p.m.

It’s gonna be a hard winter.

20 thoughts on “Gonna be a hard winter”