THE DEMOCRATS’ endless effort to remove a duly elected president from office because they just don’t like him has flopped in its latest installment.

Impeachment reached a dead end today due to no evidence — just like the Democrats’ Russian collusion pipe dream. What will they invent next? Almost all of the politicians leading the removal hysteria hail from either New York or California.

Have you noticed that?

Did you see the State of the Union Address, perhaps the best in U.S. history? It was stirring and spectacular. If you missed it, here’s another opportunity.

Did you see the dour Democrats dressed in white like those Cuban “Ladies in White” who oppose their dictatorship? Did you see those Mohammedan Democrats playing with their cell phones? Did you see Nancy Pelosi tearing up her copy of Trump’s speech?

Were you appalled? It was appalling.

And it certainly won many more votes for Trump in November. 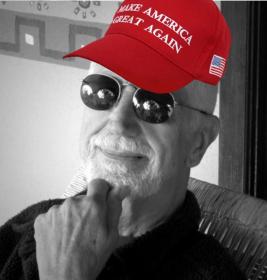 Almost two months ago, I ordered a MAGA cap from a Chinese outfit on eBay. It arrived a few days ago.

But before then, my sharp Canadian reader who goes by the moniker Brent Morrow fulfilled my headgear dreams with this photo he emailed to me.

I look sharper in this one than in the cheesy version I purchased from China. Thanks, Brent!

As I’ve mentioned numerous times before, if you want accurate information about the Trump administration and its many accomplishments, the best place to get it is on the White House website. Scroll down to the bottom and sign up for White House updates.