I was a Democrat above the Rio Bravo all of my life, and I continued with that mindset till the 2008 presidential election.

One of the numerous things that caused me to switch sides was the inaugural in January 2009. A news camera was behind the stage just before Obama stepped out to take the oath of office. He had the look of a deer caught in the headlights. It really stuck with me. He no longer has that attitude. Quite the contrary. He’s full of himself.

As this six-minute video points out, people and businesses are fleeing blue states and moving to red states. It is never the reverse, just as Cubans raft from their island to Key West, not in the other direction. Incidentally, it’s not uncommon to encounter Democrats who think Cuba is a fine and dandy place.

Even famous liberal — the term actually applies to him, mostly — Bill Maher states the obvious. Perhaps some Democrat who reads The Moon — and who has not been blocked for rudeness — can explain why he or she sticks with that party. It’s a legitimate mystery to me.

Thanks in advance. I know you are out there.

I CHANGED political affiliations in 2007. Blame Barry Obama and Rev. Jeremiah Wright. As some folks have said, I did not leave the Democrat Party. The Democrat Party left me.

I am ever amazed at the quantity of otherwise intelligent people who have not seen the light. Why, even blacks, that most-brainwashed of the U.S. citizenry, are coming to their senses and leaping the fence. Bless Candace Owens. I hope I live long enough to see her as the first real black president. First woman too.

As I’ve mentioned numerous times, I come from a sizable pack of Democrats. My last ex-wife, if memory serves, was a Bernie fan in 2016. She emailed me a few months ago asking what I saw in Trump. She seemed genuinely perplexed. I gave her a few reasons why and asked why she was not a Trump fan. Got no answer.

For her birthday last December, I sent her a MAGA cap. No reaction to that either. Maybe it was poached by porch pirates. I hear that happens above the border.

A friend sent the following visuals yesterday. Enjoy. And consider jumping the fence to the right side if you haven’t already done so. And don’t sit on the fence, which is just as bad, perhaps worse. This is no time for waffling. Be brave. We’d love to have you. 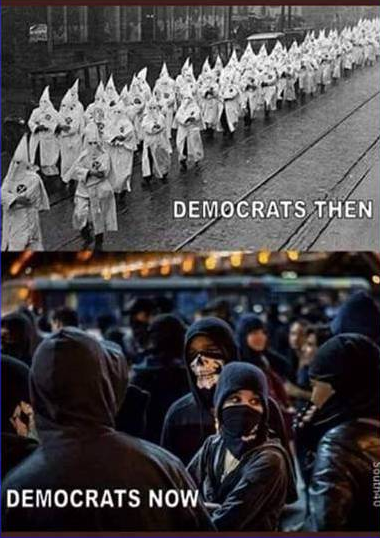 I was content with that. It made sense. Until …

I jumped the fence in 2007, but it had been brewing for years due to two things: First, the ballooning effects of Political Correctness back to the early 1990s. Political Correctness is a cultural cancer, the love child of Democrats, not Republicans. Second, the election of Barry Obama, but it was one element of his campaign that kicked me in the teeth.

That element was Rev. Jeremiah Wright and the revelation early in Barry’s 2007 campaign that Barry and Michelle had spent years sitting in a front-row pew of Wright’s anti-American, race-hate church. When Wright’s famous “God damn America” videos came to light early in the campaign, the action was swift and Draconian. Wright disappeared or, perhaps more accurately, was disappeared. Remember that?

It was akin to those Stalin photos where political opponents were eliminated from the crowd. Wright was eliminated. And Americans, full of self-righteousness, elected their “first black president,” proving forever that racism was not in their hearts.

Except Obama is not black. He is biracial, as much white as black.

But that’s another, related, issue. America continues to delude itself. The nation still has to elect its first black president. Maybe one day. Likely be a Republican.

For the first time in my life I would have voted Republican. John McCain and Sarah Palin. Alas, some glitch in the absentee voting process kept me from voting that year. I was totally on board with McCain but in doubt about Palin. That has totally reversed. McCain turned out to be a vindictive turncoat, and Palin is a joy to behold.

And I was one.

Here are two five-minute videos from the great YouTube channel PragerU. The woman speaking is Carol Swain, a Vanderbilt University professor of political science and law. I know you leftists won’t watch because they are “inconvenient truths,” but you conservatives will enjoy them very much. Feel good about yourselves.

WEEPY BARRY Obama, as I like to call him, once said, parroting his leftist party line, that “Climate Change” was an existential threat.

This is nonsense. Climate has always changed, and yet here we are.

The climate on my Mexican mountaintop sure changes. In summer, it rains daily. In winter, it doesn’t rain at all with some very rare exceptions. In spring it’s dry and dusty. In fall, it’s quite lovely.

Here’s an interesting, brief video with some sage, clear-thinking, actual scientists setting us straight on the climate-change hysteria.