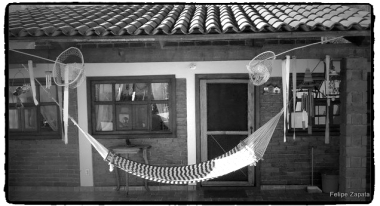 SINCE DAY ONE, over 12 years ago, this hammock has hung right there on the upstairs terraza. I brought it from the porch of the two-story rental where we lived before building the Hacienda.

This hammock is actually second generation. Its papa rotted in time and was replaced by another, identical, that we purchased during a visit down to the coast. Good hammocks are not sold here on the mountaintop.

This one too is beginning to rot. It was always outside. We never brought it in, even in frigid winter. A couple of weeks ago, two young nephews were here visiting, and they played on the hammock in the typical fashion of 11-year-olds, which is to say maniacally. One string broke.

For many years, I was out there daily, swinging in the cool air under the red-tile roof, usually with a book, often with nothing but a peaceful heart. Those were good times. But I gradually tapered off. Dunno why. My child bride has never used the hammock much. She’s not much for kicking back.

I, on the other hand, am a first-class kicker-backer.

The perspective does not make one thing obvious. You step through that screen door, and you are almost against the hammock. It’s an obstacle, but when the hammock was used a lot, it was an obstacle I was willing to accept. Yesterday, I said to myself:  You will never use this hammock again, so get rid of it.

And I did. We folded it up and upended it into a corner out in the garden patio where the yard gear lives under another red-tile roof. My child bride does not want me to throw it away, even though it is well rotted, because she never wants to throw anything away. It’s a Mexican thing.

So I will wait some months, then toss it. Don’t tell her.

I went out this morning, and swept the upstairs terraza. It felt more open, more accessible, more friendly. I think even the magueys in the big pots are glad it’s gone. That terraza has always been a bit of a problem. Tough magueys are about the only plants that don’t die up there due to winter freezes.

In summer, it’s usually covered by a third with puddled rainwater. In springtime, the sun is brutal if you’re not under the relatively small percentage covered by the red-tile roof.

But we’ll be replacing the hammock with a couple of nice, soft chairs that are designed for outdoor life. We’ll get them from Costco in the capital city. It’s just a question of when we see something we like.

For years we also used the yard patio a lot, the one downstairs with the glass-topped table, web chairs and big, brown umbrella. However, that space too has dwindled almost to zero usage. Nowadays we use the downstairs terraza with its wicker rockers almost exclusively for kicking back.