MY FATHER DIED a quarter century ago when he was just three years older than I am right now.

He was a sad man, but he loved summer. He worked evenings, which gave him days free to labor in the yard where we lived in Northern Florida in a ranch house.

He loved the Atlantic beach, sand and saltwater, and he loved tending the yard. Neither interfered with his drinking, however. Heat stirs well with highballs.

I don’t drink — well, not anymore — and maybe that’s why I don’t like gardening, and I don’t live near the beach though we can get there in three hours down the autopista.

And I loathe heat, the lack of which makes my mountaintop home wonderful in summertime. But things really grow here, much better than they did in my father’s yard.

Gotta be the latitude.

Every winter I blaze through the yard like a machete-wielding madman even though I actually use a small saw and branch trimmer. The golden datura is slashed back to basics, leaving the trunk and some nubs. It’s soft wood.

It booms back in June once it feels a touch of rain.

My father had a pink-flowered mimosa of similar size in our Florida yard. It was the only thing of any height. The rest were pansies, petunias, such stuff, all planted in rows.

Here I have a Willy-Nilly Zone where things grow, hemmed in by rock and concrete, in any direction they desire.

And for things of size, there’s monster bougainvillea, the towering nopal, a gigantic fan palm.

I was pressed, as a boy, into yard-mowing duties, and I received a small sum. I forget how much. And I once cut the Hacienda lawn too, years ago, but not anymore.

That’s why the Goddess invented pesos for me to pay Abel the Deadpan Yardman.

About a decade back, after I moved to Mexico, I drove a rented car slowly by the Florida house. The mimosa was gone. Everything was bleak. The grass was spotty due to cars being parked on it, just like a rack of rednecks would do.

There were no flowers at all. Nothing.

In the 1950s, the area was the middle class moving up. Now it’s the working class barely holding on.

Summers separated by half a century of time.

IT WAS PRETTY cold downtown the other day, but more than anything it was windy, which made it seem colder still.

Your never-humble correspondent struck a pose to share because I’m a sharing sort of fellow.

Sometimes it’s good to get personal.

People who live above the Rio Bravo tend to think that Mexico is about beaches, sun, margaritas, rayon shirts and Bermuda shorts, but it’s like that only in some places.

And those are not good places to live, just to visit.

This, plus a couple more, were added to my photo exhibit.

OLD MEN’S MINDS tend to wander, and they usually wander in reverse, which is to say memories as opposed to plans or anticipations. This morning my crusty cranium conjured up memories of Puerto Rico where I once lived. I’m here to share photos, yet again.

We’ll start at the top, a shot taken out the bedroom window of the tiny penthouse where I lived with an Argentine girl of 20 whom I called, then and now, the Argentine Firecracker. I rescued her from a sleazy San Juan bar, and she reformed herself rather nicely.

Had I chosen to reproduce these photos in their original, faded, 1970s colors, you could more easily spot her fire-engine-red panties there on the right end of the pillow.

Red is always a spectacular color for panties. 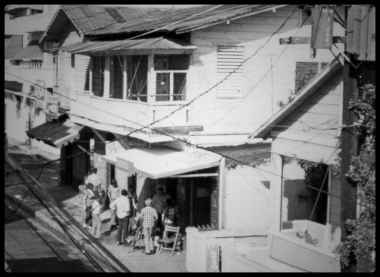 AND HERE above is a shot from the balcony of an apartment on Mango Street that I shared at another time with a Brooklyn woman. That’s her on the beach just below. What always comes to mind on seeing that restaurant photo, where the crowd stands, is Johnny Nash singing “I can see clearly now” on the jukebox down there where we often ate chicken and rice.

The Brooklyn woman and I shared space and time during the first of my two stays in San Juan. When I moved back to New Orleans after five months, she packed her bags and her damn cat and followed me, uninvited. Sometimes I had that effect on women. It was the devil getting rid of her, but I wish her well, even today. She clearly did not see that I was not a keeper in those days.

JUST BELOW is the aforementioned Argentine Firecracker, hair blowing in the constant sea breeze of the penthouse digs. She was a part of my second San Juan adventure, which is to say she followed the Brooklyn woman about 18 months later. And she lasted longer.

THOSE OF YOU who’ve read along for most of the decade I’ve been blabbering hereabouts may have seen these photos and read similar words, but new folks appear now and then. This will be fresh for them. And I enjoy my Caribbean memories.