She often got her panties in a twist due to European attitudes toward Mexico, that it was a backward nation where most roads were still made of dirt.

When I arrived below the border about four years later, most of the roads were not dirt, but the highway system certainly needed some improvement.

That has happened in spades. Many of our highways now are better than what one finds above the Rio Bravo.

Recently, Bed, Bath & Beyond opened in the nearby state capital. It’s indistinguishable from its stores in Houston or Atlanta. I love that place.

Years ago I wrote hereabouts that there were no public water fountains in Mexico. At least, I had never seen one.

I was quickly corrected by a reader who said he had spotted one way over in The Yucatan.

Just this week, I saw water fountains in two stores. One was Costco and the other was a supermarket here on the mountaintop. I was surprised.

But I would not use one. I have formed habits.

Another surprise occurred last week. Our local Bancomer branch was totally renovated, and new ATMS were included. They accept both cash and check deposits!

While I recall such things in the United States, I’d never seen an ATM here that did anything more than dispense cash.

(By the way, if you’re going to open an account in a Mexican bank, I highly recommend Bancomer.)

I recently read a report that about 80 percent of Americans feel that Mexico is a dangerous place to visit. Most Gringos have never set foot here and base their opinions on hysterical reports from the media and State Department.

Fact is you can visit here quite safely. You can go to Walmart, Costco  or Dairy Queen with confidence, and you won’t be mugged or murdered in the parking lot either.

While on the Hacienda roof a couple of days ago to photograph the water tank for the post Agua! Agua! Agua! I snapped a few other shots just for fun.

Looking down the circular stairs on the upstairs terraza. 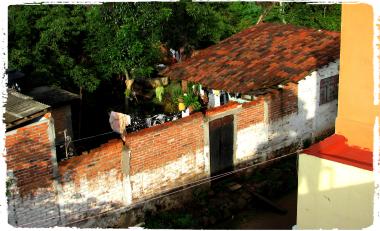 Street out back to the right.

The same street to the left.

And thanks for joining me here today.