Yesterday, I addressed the issue of caldo de res, one of my favorite meals. I mentioned that I rarely ordered it in a restaurant because the beef is usually gristly. I attributed this not to Mexicans’ liking it gristly, but to the fact that gristly beef is cheaper to buy.

Later, my child bride told me it’s because Mexicans like gristly beef. I prefer to think it’s that she likes it, for some godforsaken reason, not that Mexicans in general like gristly beef. But when she makes it at home, she does not use gristly beef because she knows I don’t want it, and she is an accommodating woman.

Above you see the caldo de res she made for our lunch today.

Caldo de res tastes better if it sits a good spell. Same goes for pozole. So, instead of lunching on the caldo de res yesterday, we hopped in the Honda and drove down the highway to a torta restaurant where we enjoyed Cubanos, the torta, not the cigar, although Cuban cigars are available here downtown.

We are amigos to the commies.

Driving home after the tortas, I took these photos along the highway to provide another taste, so to speak, of our area, which is moist and green in September due to months of daily rain.

Actually, “Yellow House and Tree” was photographed from outside the torta restaurant. It was directly across the highway.

Returning to the Hacienda today from a downtown restaurant where I enjoyed chile en nogata while my child bride chowed down on arrachera, chorizo and guacamole with totopos, we passed a new but humble business near our home.

We stopped to purchase half a pollo a la penca for another day, more to test the new establishment than for needing chicken right then. She went inside, and I waited in the Honda. This kid sat on the stoop. I reached into the backseat for my trusty Fujifilm Finepix and took a shot. She never even noticed, even though I was sitting so near.

That’s the chicken-cooking pit behind her.

THERE WE WERE, walking down the sidewalk in the middle of the leafy Calle Amsterdam last Tuesday in the trendy Colónia Roma, one of the worst-hit, we had read, areas of Mexico City during September’s killer quake.

We did not see any damage whatsoever.

Not only that, we didn’t spot any earthquake damage at all during the four days we spent in the nation’s chaotic capital.

We go to Mexico City twice a year to air out our small condo and pay a few bills we can’t pay online. About the only thing left in that category is the security service, listless guys who hang out at the entrance to our “gated community.”

This condo, one might recall, is where my child bride lived when we met during a visit she made in 2001 to my mountaintop town. The rest, as they say, is history.

She worked as a civil engineer for the federal highway department, and the “gated community,” a series of five-story buildings, each with 10 apartments, was constructed specifically for, and sold to, employees of the highway department.

We paid off our unit years ago but only received the deed last Spring. Mexican bureaucracy moves at its own laughable pace.

Aside from airing out the place and paying the security service, we didn’t do much. Washed sheets and towels from the previous visit and hit a few dining spots, our favorites being Rock N’ Burger, a food truck across the street, and a new restaurant a short taxi ride away that serves the best caldo de gallina on Earth.

The caldo de gallina was served at a restaurant named La Jefa. I wrote a review for TripAdvisor, but since the eight-month-old restaurant had never been reviewed, it has not yet appeared on that travel website.

We found La Jefa by sheer luck, walking down the street.

I view our Mexico City digs only as an investment for my wife. It’s worth a good bit more now than when she signed the mortgage in 1997. We spotted a For Rent sign on one of the identical apartments, so we called to inquire.

They were asking 6,000 pesos monthly, which surprised us, favorably. We may rent it in the future, especially when I cannot walk up the four floors due to decrepitude. That day, however, has yet to arrive. I still bound up like a teenager.

The two-bedroom condo is small, so small that it would fit, literally, inside the living room here at the Hacienda. This makes it easy to tidy up. It gives me claustrophobia at times. However, entire families of four or more, plus dogs, live in some of the adjoining, identical units. Incredible. 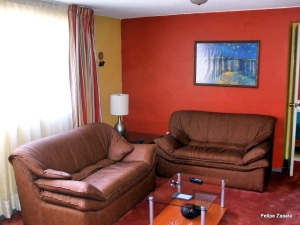 Here’s the living room. We sit here evenings and watch DVD movies and, like back at the Hacienda, dine on salads made by me.

I remember well the first time I set hoof in this place back in 2001. She had invited me to visit. The furnishings and wall colors were entirely different, but I recall the visit fondly.

I took this photo that first night while she was in the kitchen fixing something for supper. It’s one of my favorite shots, and she hasn’t changed much in the last 16 years.

* Unless your mama’s Mexican. 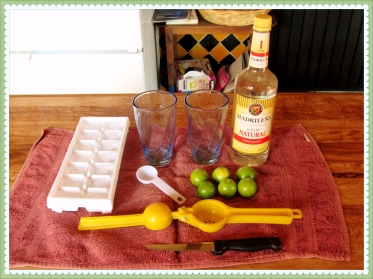 MAY IS THE warmest month of the year here, some might even call it hot, depending on where you’re standing.

In the evenings, upstairs at the Hacienda where, alas, live the Samsung Smart TV and the computers, it can get unpleasant in the late afternoon and early evening.

It’s even been known to chase us downstairs prematurely when we’re trying to relax with Netflix.

And, of course, we have no air-conditioning because 99 percent of the time, it’s not necessary.

Most of downstairs, however, never gets hot due to the high ceiling in the living room. In the bedroom, which has a somewhat lower ceiling, it gets a bit stuffy at times.

We have a ceiling fan in the bedroom, the sole ceiling fan at the Hacienda if you don’t count the fan in the ceiling of my child bride’s pastry kitchen, which stands apart.

May is our worst month. There is the “heat,” the dust, the dead grass in the  yard. May is just a period that one must endure  in order to enjoy the other 11 months.

One way we endure May is by making limeade.

The first limeades of 2017 were made this morning, a little tardy this year due to this May’s being somewhat less stuffy than the average. We’ve been lucking out.

That’s our limeade station in the photo. One nice limeade requires three limes, three tablespoons of barroom sweetener, water and ice. That’s it. Stir and serve.

Those limes are called lemons down here, limones. What the Gringos call lemons are rarely seen. The yellow things.

Doesn’t matter. Limes do the trick. Every May. Until it starts raining daily in early June.

Then you don’t hanker for limeade anymore.