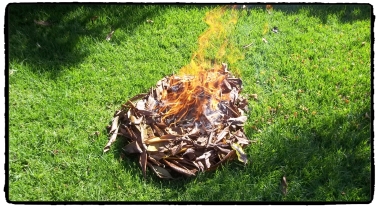 WE STAND ASTRIDE the cusp of two seasons. Fall and winter. And today they held hands.

The rose bushes out by the stone wall, in an heroic final effort, birthed a bloom. I’m sure it will be the last we’ll see till next Spring. I cut it, and it now sits in a rosebud vase on the dining room table, looking lovely.

After settling the rose into its spot, I returned to the yard, picked up a large rake and started to toil. Beneath the loquat tree was a sea of dead and dry leaves.  I made a mountain.

Nearby was another ocean of dead leaves. They had descended from a pear tree. They too were brown, but they were damp. I collected them into a separate pile not too distant from the loquats.

I was hesitant to burn them together due to the quantity. Once last year a blaze got away from me, causing quite a bit of dashing about and bellowing. I’m too old for that. But the grass was brown then. Now it’s still green. No matter. Two fires are preferred. Last year someone laughed at my predicament.

Dignity must be maintained.

I got a bit of ocote in hand, plus a lighter. Ocote is starter wood that burns readily. I had a piece the size of my thumb. I lit it and slowly sank it into the loquat leaves. It began to spread. I stood back.

The pile in the photo above are the loquats.

When that hill had almost burned out, I raked the pear leaves atop the smoldering loquats. As mentioned, the pears were damp. Dry leaves burn nicely. Wet leaves do not burn at all. Damp leaves can burn, but they smoke. Man, do they ever smoke.

I would have been executed in California. I sent massive smoke plumes throughout the neighborhood.

But I was burning leaves, for Pete’s sake. It was neither nuclear waste nor even plastic bottles. It was a natural, if bountiful, smoke arising from some of the Goddess’ own children. I felt no guilt.

So the lawn looks better now, and there’s a rose in the dining room, the second loveliest thing in the Hacienda.

I am married to Number One, of course.

FIREPLACES WERE a part of my childhood because we spent lots of time at Granny’s House. Actually, we lived at Granny’s House until I was almost 7 years old. There was a fireplace in every room save the bath.

After moving away — to Florida — we returned often, for decades.

There is something primal and savage about fire. It speaks to us, and warms and comforts us too. Before building the Hacienda we lived in a two-floor rental nearer downtown. There was a fireplace upstairs and down. The first year I lived there alone, not long after moving over the Rio Bravo, wondering what the devil?

It was very cold that first winter, and I would sit long spells with a coffee cup in the mornings in a chair placed quite close to the fire. I would watch those flames, which are fascinating if you pay sharp attention. If you are spectacularly alone, fire can become a dear friend. Like love, it warms you.

When we built the Hacienda, we told the headman, a stone mason among other things, that we wanted a huge fireplace downstairs made of stone. He did just that, but we would have preferred something even larger. I don’t recall now why we did not stop him in mid-work to get something bigger.

He was a stubborn old man.

See that chimney from the downstairs fireplace snaking up the wall toward the ceiling? It continues on through the second floor, also against the wall, providing an architectural touch with cornices on the floor above. The chimneys of both fireplaces are not inside the wall. Instead they abut the walls inside, not out.

I would have liked to have one of those chimneys that are so immense a person can stand inside or nearly, but what we have, especially downstairs, is pretty grand. We don’t use them much, however, but they’re great to admire.

When my Granny died in the 1980s, my parents moved to the Georgia farm and renovated the house. All of the fireplaces were covered, and central heat and air was installed. The ceilings were lowered. A new entrance was constructed. My parents were practical people, but I would have kept at least one fireplace.

Perhaps that one in the kitchen where I heated Coca-Colas on the hearth on cold mornings. Small Cracker kids sometimes do the craziest things.