GRAB A BOX of popcorn and get a Diet Coke for your health.

Lean back and enjoy this eight minutes of great imagination.

Sometimes you just gotta have a little fun.

Rated R for language if you care about that sort of thing.

I RETIRED QUITE early, age 55, and that means you potentially have lots of years ahead of you, years in which you must do something or other.

My plans were few. I knew I’d use the time to read books. I like to read books because it’s an interesting thing to do, plus it makes me even smarter than I already am.

Not on the plan was yard work, which I dislike. My distaste for yard work was one of the reasons I recently had part of the Hacienda lawn filled in with stone and cement. That’s the lighter part in the photo above. The darker is the sidewalk, which is 15 years old.

But I’ve discovered that I’ve simply substituted one form of yard work with another. The stone and concrete require sweeping. The primary reason is that there are plants, big ones. One is the towering nopal, and the other is the monster bougainvillea.

I was out sweeping this morning when this realization came to me. It’s still yard work. However, sweeping stone and concrete is far more fun than fussing with grass.

I don’t regret the stonework. We intend to do more next year.

Back to the theme of retirement. Lots of folks dream of retiring early, which is a phrase open to interpretation. The standard “early retirement” is 55, and that’s what I did. Other people, mostly young ones, dream of leaving the work world even earlier. At 40, for example. Good luck with that, amigos.

Here’s what you usually have to do to retire early, say, at 55. Don’t go into debt. Save, save, save … and invest wisely. Being single can help. These are not difficult things to do, but few folks do them. It’s equally simple to lose weight. Eat less crap, and do regular moderate exercise. Again, easy, but few people can do it.

I’m having a fun time, and I’ve been having fun since 2000. Before that, not so much. One late afternoon recently, I was sitting here before the Hewlett Packard screen, and I looked out yon window. Below is what I saw. 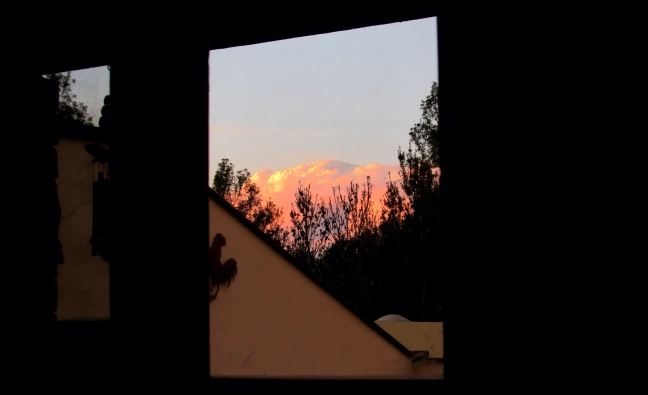 THESE TWO GROUPS have lots in common. Atheists and Mohammedans.

They both want to stamp out opposing religions, and they can get downright nasty about it too. What? you say. Atheism is not a religion? Sure, it is.*

Atheism states there is no God, which means they know what happens after death in spite of having not a shred of evidence. Their belief is based on faith alone, which makes it a religion. Tell an atheist he’s a man of faith. It’ll really gall him, which is fun.

Mohammedans want to kill those who do not embrace their religion. Atheists don’t go that far, not yet, but they are ever campaigning to have opposing religions suppressed. They want all manifestations of other religions erased from the public sphere.

Note to atheists: If you oppose organized religion, there is only one logical way to do it, and that’s to embrace agnosticism. It’s not a religion because it does not claim to know what happens after death. Agnosticism accepts cluelessness.

Agnosticism is the only rational opposition to religion. If you’re an atheist, you might as well build cathedrals, appoint clergy and invent a Holy Book.

Some saints would be nice too.

* Not all atheists are like this. Quite a few are fine people, minding their own business. Let us liken them to gays. Many of them are good people, but many want to put bakeries out of business out of pure spite and meanness.