EARLY IN DECEMBER we had a number of overnight freezes, not typical of the month. But it passed, and since mid-December things have returned to normal, more or less, perhaps even a bit nicer than normal.

But that’s not to say it’s comfortable in the mornings, far from it. And how do we mountaintop Mexicans deal with the morning chill? We go outside and stand in the sunshine. This is very common. I do it myself.

This morning I went for my usual exercise walk around the neighborhood plaza. A fellow who runs a little store on the corner was standing on the sidewalk, sunning himself. He frequently does that.

On the walk up to the plaza I spotted another guy standing in the sunshine. I also saw a hog, which isn’t common. That same fellow had the hog on a rope that was tied around a light post. Pet or future lunch? Who knows?

On returning from the plaza, heading back home, I saw the hog walking alone down the street with the rope trailing behind. His owner was nowhere in sight. The moral to that yarn is that if you’re gonna tie a pig to a post, do it tight.

On getting home, here’s what I saw: Guys in the yard digging up grass and the sole remaining giant maguey. Yes, after years of thinking on it and talking about it, I’ve begun the process of replacing grass with concrete and stone.

I have a four-year plan and with luck I’ll live long enough to complete it. The fourth year would have me older than my father was when he kicked the bucket in Atlanta at age 75. It’s preferable to think positively.

The guys say the work will take a week, and that means it likely will be two weeks. I’ll have photos later. Stay tuned. We are also, after 15 years at the Hacienda, in the process of abandoning five-gallon jugs of purified water. Stay tuned about that too. January is a month of much activity at the Hacienda.

Now I’m heading back outside to stand in the sunshine.

YESTERDAY ABOUT noon, I was sitting on a web chair beside the glass-top table on the Jesus Patio. I was sporting my thick, black, winter hoodie with the hood atop my head. It was a bit overcast and quite cool.

To flip the hood up, I had to remove the old straw hat, which I sat on the table. It was then that I noticed that I had an art shot. The camera was with me, so I photographed. That’s the cursed peach tree, sans leaves, you see reflected.

I bought that hat for just 50 pesos a few years ago in Zihuatanejo.

For a good length of time, a hog next door was squealing bloody murder, and that’s probably because murder was in his future. They come, they go, they’re eaten.

In addition to the camera, I also had my Kindle because my initial intention on sitting out there was to start a new book, a brief bio of Mozart, but I got sleepy, set it down and started to doze. I woke a bit later, refreshed, and began to think of spring repairs.

Every December I have a list already made up of “spring” repairs for the Hacienda. However, I usually start them as soon as January arrives. If I actually wait till spring I may not have enough time to finish. It depends on the length of the list.

The list is usually work that needs to be done outside, either in the yard or on the house’s exterior. Doing such labor from June through October is a challenge due to the daily downpours. The time for work is from January through May.

This year’s list, which I’ve already printed out, consists of eight items.

I’ll be getting price estimates in January. Contributions accepted from readers.

So there I was on the Jesus Patio with Mozart, the hat, the camera, hearing the hog and thinking of springtime chores as the cool breezes blew.

* Patio de servicio, something most Mexican homes have. It’s where the water heater, propane tank, scrub sink, etc., are installed. Ours also has a clothesline. Service patios are usually outside.

ON THE ROOF recently to wipe the rods of the solar water heater, I took this video and snapped the photo below.

I’m a sharing sort of fellow.

At about 10 seconds into the video, you can see what I call the Garden Patio down there with the red water tank. It’s where I keep yard gear. And then at about 23 seconds you can see the solar heater at the left, briefly.

In the photo below, the brick surface is the roof of the kitchen. Farther along, the red tile covers the downstairs veranda.

In the upper right corner is the home of our grumpy neighbors, the ones with the horse, pigs, dogs, etc.

It’s fun to go up on the roof because the view is spectacular, not just the neighbors but the mountains. 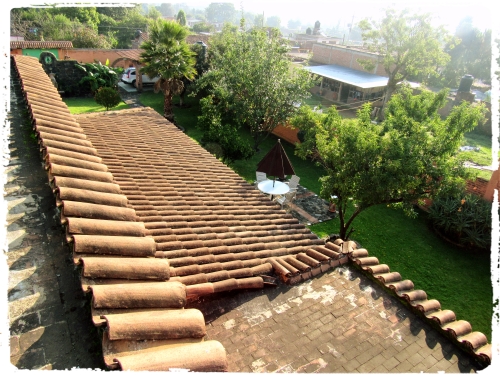 The only other video I’ve shot from atop the roof was made five years ago. It’s on YouTube, not Vimeo, and presents quite a different perspective. Plus, it’s got Hillbilly music!

That’s all for today. Enjoy yourself.

HERE I SIT on the veranda, just in from the morning walk around the neighborhood plaza, something I do most days to maintain my boyish physique and high humor.

I am an ideal object of envy. No job. No money worries. My health is good. My wife is young and beautiful. The weather is wonderful. Waffles and maple syrup (100%) await.

Birds sing. Burros bray. Horses neigh. Dogs bark. Hogs oink. All within earshot, night and day. And last night till 2 a.m., musicians howled on the plaza, so we slept with earplugs, something that doesn’t warrant envy, alas.

Hereabouts 11 a.m., the sky is blue and white. The temperature is 69. My utility bills are low, and my grass is high, green and damp. My wives are all alive and my daughter too.

I have no dogs, no cats, no outstanding bills, and both of our cars run smoothly though they could use a wash. It’s the rainy season, a constant battle for self-respecting vehicles.

The waffles are ready now, I’m advised. The maple syrup too, the daily second breakfast around the hour of 11.

It’s an enviable position in which to find oneself.