NO, NOT TRUMP, silly. He’s not Goebbels. He’s the good guy.

The Blond Bomber took steps this week to improve the cops. He signed an excellent executive order, and here are its four main items:

I got this straight-forward information from the White House newsletter, which I have often recommended for honest news about the Trump Administration. For dishonest information, look to the mainstream media. Here is how the NYT/DNC and the WP/DNC reported the positive news:

First, the Washington Post piece, an exercise in sneaky journalism. The headline says:

Trump signs order on policing, but Democrats and activists say it falls short of what is needed.

You see what they did there? Were it a story about Republican dogs discovering a cure for cancer, the WP/DNC headline would say:

Let’s turn to how The New York Times reported the positive news. It was a little headline halfway down their website, sneakily hidden. Clicking on the headline did not take you to the executive order, which it should. No, it took you to a list of “protest” stories, and when you scrolled down far enough, near the bottom, there was the item at last.

These are two classic examples of the fake news/slanted news you get from the corrupt Gray Old Ladies of Journalism these days. The Goebbels Playbook. It is political propaganda. Get honest reporting elsewhere. I am available for recommendations.

I imagine The Washington Post and The New York Times still provide great coverage in many areas, i.e. food, travel, high society, etc., but regarding politics, culture and related issues, they are now corrupt and wandering in the PC wilderness.

In closing, I leave you with a little humor. Chuckles are good. 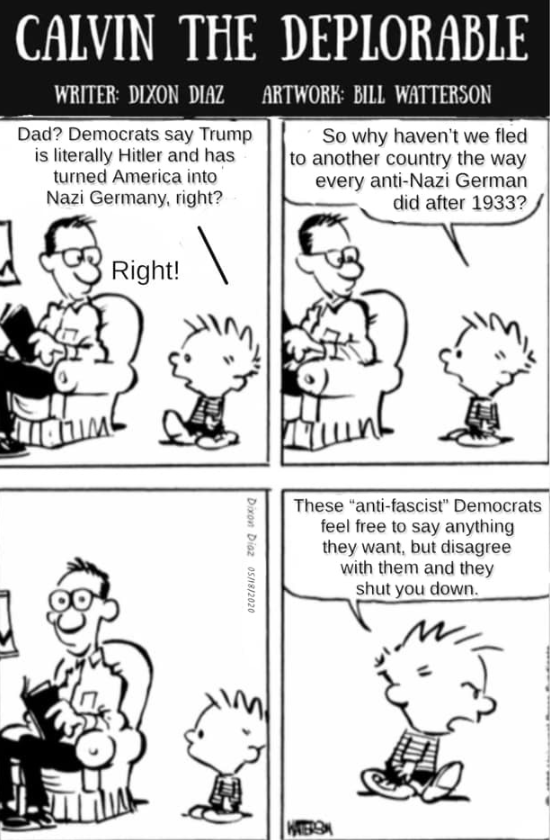 (Note: When the Democrats and “activists,” who are one and the same, say Trump’s actions don’t go far enough, they mean he did not address “systemic racism,” a leftist catch phrase that refers to something that doesn’t exist. There is no systemic racism in the United States. There is no “White Privilege” either.)