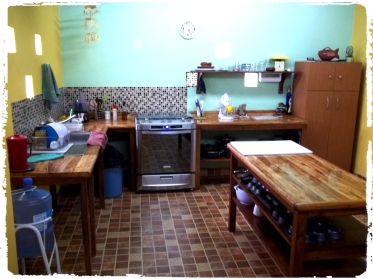 WHEN THE pastry workshop was completed in February, we thought all was done, but it decidedly was not. There was the matter of the stove.

We had purchased what seemed to be a serviceable stove made by Whirlpool, but it was anything but serviceable. The oven would not hold a constant temperature. Finally, after numerous visits by Whirlpool “technicians,” a woeful misnomer in this case, the store where we bought it — Coppel — took it back and refunded most of the money.

Bizarrely, we learned the oven has no thermostat. How can an oven have no thermostat? Apparently, this is becoming more common, which explains the new models that have no temps on the dial, just temperature ranges, or they simply say 1, 2, 3, 4.

An oven with no thermostat is like a car with no steering wheel.

So off we went to Liverpool in the state capital, spent almost three times the cash, and two weeks later we had a lovely appliance called i/o Mabe, which is the high-end line of the popular Mabe brand. It has many bells and whistles, and my wife is happy.

The i/o Mabe has a thermostat.

I have combined and edited the three-part series from some days back called Newspaper Days, made it one website, and added it to the Bookmark list in the right-side column. FYI.

On June 7, we Mexicans go to the polls, the midterms. One of the many sweet aspects to being a Mexican citizen is that I can vote, canceling out the time and trouble at least one Mexican leftist takes to mark his ballot. This is swell. I wish I could cancel out even more than one.

There are 10 official political parties in Mexico, which is both good and bad. The bad is that we risk becoming like Italy. The good is that it’s fun to have options.

I read the official websites of most of them, skipping only the Workers Party because you don’t have to be a rocket scientist to know where a party stands when its emblem is a yellow star in a Red circle and the Institutional Revolutionary Party (PRI) because I am already familiar with it. The oligarchic PRI ran Mexico for about 70 years, stifling opposition.

I am a PAN man, the National Action Party. This is the long-time conservative party, and I only deviate from it (to the PRI) in special cases. I voted for PRI’s presidential candidate, Enrique Peña Nieto, three years ago because the PAN candidate stood no chance, and I did not want the leftist PRD candidate to win.

Our political parties contain some odd birds. The Encuentro Social are evangelicals. The Humanistas are, of course, Humanists. Perhaps the strangest of all is the Green Party, which is actually an arm of the PRI. The international Green movement excommunicated our Greens some years back because our Greens supported the death penalty for kidnappers.

Our Greens have backtracked on that, now advocating life prison terms for kidnappers instead of execution. I prefer execution. Color me old Mexican Green in this detail.

The Greens will promise absolutely anything. Free schooling. Free medicine. If it sounds good, they promise it. It’s outrageous. They have chutzpah.

A relatively new party is the Morena, the brown people’s party. Morena means brown-skinned in Mexico. It is the invention of the perpetual loser, Andrés Manuel López Obrador, commonly known as AMLO. He is a demagogue who has bounced about in different parties, and now has formed a new one, a blatant racial call since 90 percent of Mexicans are brown

May he continue his losing streak.

Let us now turn to the Mohammed cartoon contest, which I supported. It was appalling to see so many talking heads, even on the right, including my man Bill O’Reilly of Fox News, going wishy-washy on Pamela Gellar’s courageous contest in Garland, Texas.

David Frum, writing in The Atlantic magazine said this:

“When vigilantes try to enforce the tenets of a faith by violence, then it becomes a civic obligation to stand up to them.”

And Charles C.W. Cooke, writing in the National Review:

“There can be only two possible outcomes to this fight: Either Americans will eventually learn that they should not provoke radical Muslims, and thus that self-censorship is the order of the day, or radical Muslims will learn not to be provoked. Whether they have intended to or not, those who have proposed that Pamela Geller and her ilk should voluntarily refrain from provoking Islam’s discontents have run the risk of tacitly endorsing the former outcome.”

Let us continue to provoke them. And shooting them dead when appropriate.