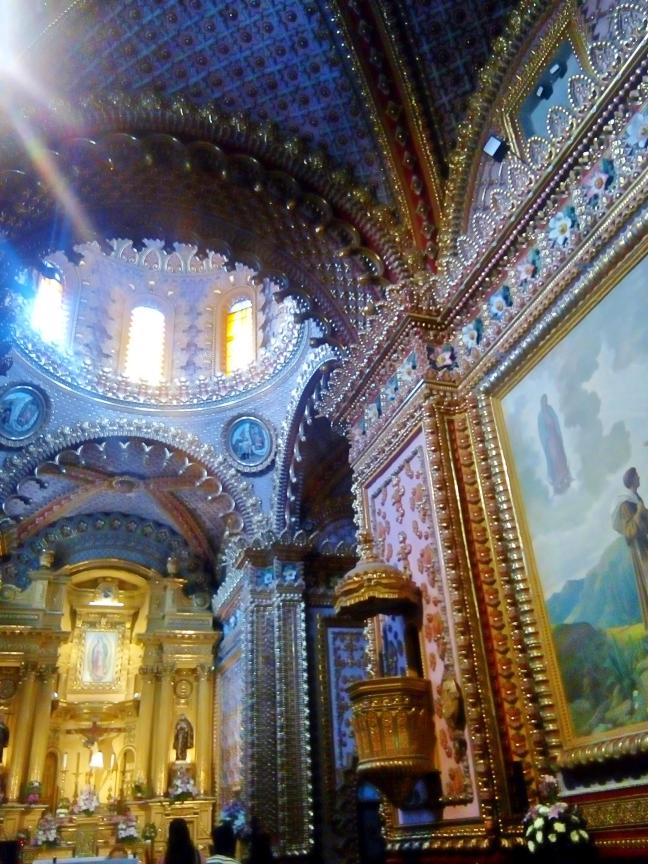 THIS IS THE Santuario de Nuestra Señora de Guadalupe. It’s the most spectacularly colorful church I’ve ever seen. My child bride says there’s one just as impressive or better in Oaxaca, but I’ve never set foot in Oaxaca.

This photo doesn’t do it justice. I took it with my cell, having left my camera at the Hacienda when we visited the State Capital today, mostly for shopping and eating.

We ate lasagna. Then we visited the Modern Art Museum. Following that, we walked across the street, under an ancient aqueduct, and a block farther to this church.

We sat a spell.

Then we walked another block to a long, tree-lined pedestrian street full of old Spanish Colonial buildings, some of which are collapsing but some are restored and beautiful. We sat on a stone bench, and I shot the next photo.

We were less than two blocks from where I lived above a garage after arriving in Mexico in January of 2000. Square in the middle of this photo, you can see the back of a phone booth that’s been there at least 20 years, and who knows how much longer?

Maybe the Conquistadors installed it.

I had a Mexico City girlfriend before moving down here. We’d met on Match.com, and she’d already visited me twice in Houston before I retired youngish and moved south. She was 50 years old at the time but still a real babe. Some women can do that. Her mother was Mexican, and her father was a Spaniard. It mixed well in her, believe me.

Almost every night during the four months I lived above that garage just down the street, I walked to this phone booth and called her. The relationship did not pan out, and a year later we went our separate ways. Just as well because she was not as agreeable as the child bride I ended up with, who is also a real babe. Some women age well.

Then we stood up and headed to Costco and Walmart.