OUR BACKBONES are ticklish things. Sometimes they go out, as mine did last Monday morning while I was sitting right here at my desktop computer near the crack of dawn. Here’s what happened:

I coughed. It was a bush-league cough, a cough so trivial that it would have registered minus-5 on the Richter Scale. But that little cough combined in some weird way with how my torso was situated in the chair.

I knew exactly and instantly what it was because I’m no stranger to my spine going south. Oh, nooooo, I moaned to myself.

I tried to stand up. Jesus, Joseph and Mary! I did not get far. I slowly returned to the chair. And I’ve been mostly home-bound ever since.

I’m no stranger to this, but it’s been fairly rare in recent years. In my 40s, the last decade of my previous marriage, I had this problem often. It coincided with the gradual collapse of said matrimony, indicating there’s occasionally a psychological element to the issue. The same is thought by some to be true with rheumatoid arthritis.

I do not have rheumatoid arthritis. Knock on wood.

On getting divorced from my last wife, the back attacks ended abruptly, and I went years without a recurrence. I still occasionally have the problem. Maybe once every two or so years. I don’t think there’s a psychological element now because I’m a happy boy. 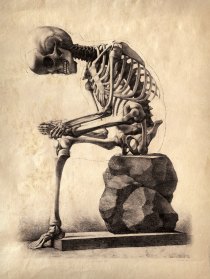 It invariably starts with a funny twist that I do out of inattention. A cough or sneeze can also nail me.

As I write this, last evening, I’m winding up my fifth day, and I’m feeling better but not home free by any means.

One aid I’ve enjoyed this time that I never had before is one of those girdle-type things that weight-lifters and warehouse guys wear. It’s is very helpful. My child bride bought it last year for gym use.

The internet says that 90 percent of the time, these things cure themselves with no medical assistance. That’s always been my experience, and I hope it continues, but my advancing age could complicate things.

It hasn’t so far. I’d like to say this is a pain in the ass, but it’s actually a pain in the back. If you’ve never had this problem, you’re one lucky person. It hurts!

THIS IS LOTS of fun to watch. I think my favorite is the insufferable, ever-smug, dyke Rachel Maddow.

The cluelessness of these people is astounding. This gang of arrogant, East Coast swells cannot grasp an election outcome counter to their view of things.

The Trump Train, running at full throttle, bell clanging, hit them from behind while they were gazing the other way, with blind adulation in their eyes, at Hillary, their empress.

I found this on Gab, the recently launched, rapidly growing, free-speech alternative to censor-loving Twitter.