HAVING LOST ITS raison d’être, the gas-fueled water heater sits silent out back.

Even its pilot light has gone dark.

But since that first set of panels was only connected to the gas heater — the theory being that it reduces the gas used to heat water — it did not have any practical effect on us personally.

But I knew the solar panels were doing little because I’d climb the circular stairway to the roof now and then to open a valve to find tepid water coming out most every time.

That first heater, manufactured by Rotoplas, one of the biggest names in Mexican plumbing, had a 10-year warranty. Finally, I got off my lazy keister and returned to the hardware store where the Rotoplas had been purchased. I expected one of two responses:

2. Okay, but the warranty will be pro-rated. You’ll get 60 percent of your cash back.

Option No. 1 is common down here.

Imagine my shock when Rotoplas picked up the old heater and returned 100 percent of the purchase price, 10,000 pesos, about 665 American dollars these days. I used that money to buy another solar heater, a different brand, Solemex. Never heard of it. The Solemex cost 6,000 pesos, about 400 dollars, but I paid about 1,000 pesos to have it installed.

The Solemex did not work either.

The water it produced was blazing hot. It just did not deliver the water to the faucets in the Hacienda. Oh, it sputtered out some hot water now and then. On rare occasion, it even worked well. Sometimes no water at all came out of the showerhead. Nada.

We even installed an inline pressure pump. The poor pressure remained the same.

But, to make a short story even shorter, the problem was not the solar heater. It was that the plumber who installed it was clueless. After returning twice, he finally figured it out, and now it works like gangbusters. We are hot and green!

The Solemex is connected directly into the house, not to the gas water heater.

A friend down the highway has installed a massive array of solar panels on his roof to generate electricity. He does not do solar water, but his electricity bill has mostly disappeared.

Maybe one day I’ll go green with electricity too. I feel like a hippie tree-hugger.

THE PASTRY workshop is finished. The final step, the installation of counters and a worktable, was done by an old carpenter we called Geppetto because his appearance reminded my child bride of Pinocchio’s pal.

Geppetto did much of the groundwork downtown at his shop. Then he and his son brought the bases here in a taxi pickup truck. The final work was done in two days, and we’re quite happy with it.

We had purchased about 15 feet of Formica at a building-supply store here in town.

Now we must move all related cooking gear from the house’s kitchen to this new space.

You might recall that the solar water heater on the Hacienda roof was removed at about the same time the unrelated work on the pastry workshop got under way in November.

We purchased the heater four years ago, and it was never worth warm spit. This was surprising since it was manufactured by Rotoplas, one of the big names in Mexican plumbing gear. It had a 10-year guarantee and, to Rotoplas’ credit, they removed it and returned the full purchase price of 10,600 pesos. 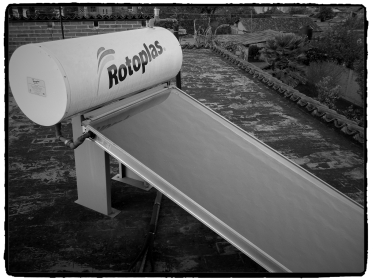 So we bought a new one, slightly larger, made by another company, Solemex: 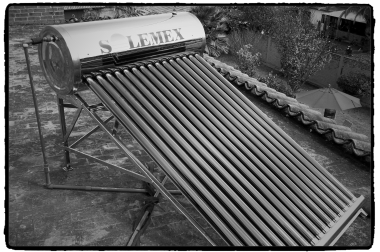 The hardware store manager told us they had sold just six of the Rotoplas heaters, and four were lemons. They’ve sold more than 25 of the Solemex and, he says, the owners are all contented customers.

Let us pray that we will be contented too. And it cost only 6,000 pesos.

(For a blow-by-blow photo gallery of the workshop construction, go here.)

(For a taste of pastry production, go here.) 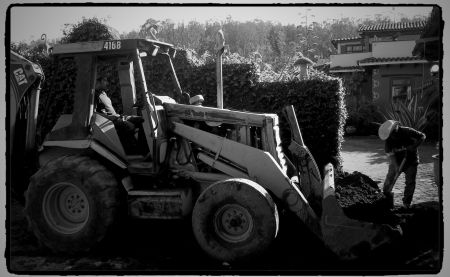 EARLY WEDNESDAY we left the construction crew working at the Hacienda and drove the 40 minutes down the mountainside to the state capital for a bit of shopping.

The honcho Ramón had told us he was renting a machine to excavate the septic tank. We envisioned a hand-held apparatus of some sort and a smaller hole, so imagine our surprise at finding this when we returned four hours later. The dirt this thing was excavating was being tossed into a dump truck out on the street.

By late afternoon Thursday, the septic tank was making progress, as the photo just above shows. There is nothing prefab about this baby. It’s being built from scratch, like Granny’s peach pie. The bottom had been covered with a layer of gravel, unlike the pie, and a concrete foundation lined the sides, atop which bricks were placed.

Liberal use of string keeps things level, and notice the spaces between the bricks in the lower part of the wall, obviously some sort of filtration system. It’s a hoot to witness this process.

For previous entry in this gripping saga, go here.

As always, for a blow-by-blow photo history, go here.

While we’re on the subject of home improvement, let’s turn now to the solar water heater on the Hacienda roof, which has never worked well in the four years it’s relaxed up there.

About a month ago, a commenter on another post inspired me to climb the circular stairway to the roof yet again and test the water. Still tepid, so I decided to return to the hardware store where I purchased it and complain for about the third time. The gizmo has a 10-year guarantee.

The reason I had not pressed harder on this is because I know that guarantees in Mexico are less a promise than a come-on, a selling point. They are not cast in rock. There is little a Mexican loathes more than giving a refund.

Previous complaints led the hardware manager to phone the manufacturer, a major Mexican firm, while I was sitting there with him. Drain the tank to get rid of crap, I was once told. I did that. Another time I was told to flush the whole shebang with vinegar. Never did that because I had no faith it would work.

I won’t bore you with details, but today the hardware store will send someone to dismantle and haul this bugger away. Turns out they had discovered a major design flaw. Well, duh. Initial indications are that I will get a full refund, not a prorated one. The purchase price was 10,000 pesos, about $850 U.S. at the time.

We’ll be buying another one, a different brand with a better track record. The hardware manager said they only sold six of mine, and four were defective. He does not sell them anymore. He’s sold 26 of a different model from a different company, and they work great, he claims, plus it only costs about $450 U.S.

This turn of events would not have happened were it not for the verbal, unintended nudge of a commenter here some weeks back. I don’t remember who it was, and a cursory (I’m lazy) search of the stacks revealed nothing. Please raise your hand and take a bow. I appreciate it.

Your reward, should you choose to accept it, is a free week in our lovely downtown Casita. Bring a friend. No smoking, no pets, but other than that, it’s here for you. No joke.