THIS IS OUR upstairs fireplace, a photo I shot just this morning.

I woke up this morning, leaped out of bed and ran into the living room to see what I had scored, but there was nothing waiting in spite of my having been a good boy all year.

I spent last night alone after transporting my child bride to the nearby state capital yesterday afternoon where she hoopla’ed late into the night with a gang of her relatives, a Mexican family requirement on Christmas Eve.

This after she had just returned the previous day from Guanajuato, again with a gang of her relatives. They were there three days while I cooled my heels at the Hacienda overseeing the painter who will return tomorrow, by the way.

Well, anyway, I rushed into the living room this morning and found squat in the way of gifts. I had asked for an AR-15, a bazooka and a Trump T-shirt.

Perhaps the fact there is neither Christmas tree nor stockings hung on the chimney with care had something to do with Santa’s ill-spirited no-show.

Maybe I should have put out cookies and milk. Or whiskey and steak.

Could it be that Santa does not like Mexicans?

I’ve learned my lesson. Next year I’m not going to be a good boy.

BEING A FAN of President Trump automatically makes me a Nazi, a racist, yada-yada, according to many who vote these days for the Democrat Party. Many, but not all.

I put folks who still vote for Democrats* in one of two categories:

I’m here to tell you a tale and, simultaneously, toot my own horn. Let us title what follows: Good Deeds by a Nazi. It will be fun.

In the late 1990s, I did volunteer work in Houston with two agencies. One was Meals on Wheels. Since I worked evenings at the newspaper, my days were free, so I delivered meals to the needy who, more often than not, were (egads!) black!

What was I thinking?

One in particular became my favorite, a 99-year-old woman who lived alone in a shotgun house in a ghetto abutting downtown. Even on days when I was not delivering her meal, I would sometimes stop by her house, and we would sit on the front porch a spell.

She enjoyed that a lot. She had virtually no visitors, having outlived all her friends, and her relatives were not worth warm spit.

At times I would buy her food on my own dime, and I’d wrap it in foil at her house, and put it into her freezer. Once the two of us went to a high-end seafood restaurant on the South Loop. It overwhelmed her, and most of her plate went home in a doggy bag.

I ate all mine, however. It was very good. I have a photo of her sitting in the passenger seat of my green Ford Ranger pickup on that very day. She dolled herself up for the occasion.

For her 100th birthday, I got a large number of my newspaper coworkers to send cards. Many included cash gifts. She received so many that she opened only a few. One wonders how much money she left in that pile of envelopes in her spare bedroom which was full of all manner of junk. She died soon after her 100th.

My other volunteer post was working at an agency that employed retarded people, oops, I mean mentally challenged. It gave them a purpose and maybe they earned some cash. I don’t remember.

What we did was cane chairs.

I was one of two or three normal people who did both caning — I had to learn — and supervising of the other people, the ones down a few steps on the ladder of mental acuity.

They were exceptionally nice people. Some were only slightly challenged. Others were severely disabled.

But they could all cane chairs.

We had a Christmas party in 1996, which is when the photo was shot at the top. The group includes both the retarded folks and the normal ones. I played Santa.

It was a good time, even for a Nazi.

* I long did, but it was different back then.

(Note: One day, making my Meals on Wheels rounds, a guy ran a red light and creamed me in my Ford Ranger pickup. The truck was quite caved in on the driver’s side, but I was not hurt. The other driver was very contrite. A year after the accident, he phoned me and asked how everything had turned out, which I thought was very nice. Another of those damnable black people too! A Nazi can’t get a break.) 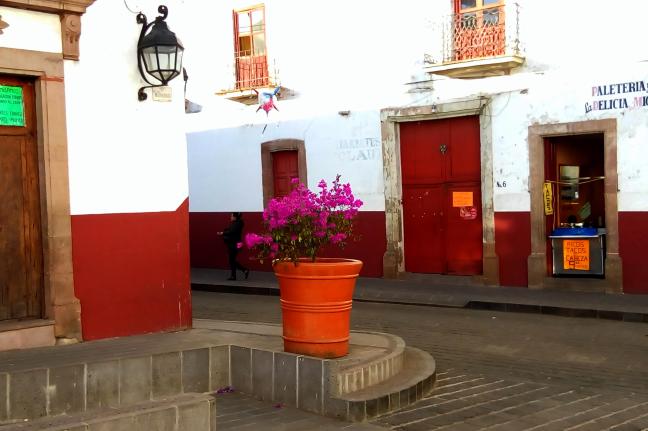 WALKING AROUND a corner yesterday, I paused to take this photo. This is the intersection of two of the streets that have been renovated here over the past couple of years, street renovation that included the rectangle around the main plaza, work that is on the verge of being completed.

After gussying up the streets and sidewalks, huge planters have been placed in some areas. Some of them have been broken by vandals, but most are intact, often with bougainvilleas like this one.

Bougainvilleas are not fond of living in planters, so we’ll see how it plays out over the long haul. This one seems happy enough.

Later yesterday, I shot the photo below. Our main plaza is full of Yule decorations, huge ones. These figures are likely ten feet tall.

The plaza has lots of such stuff. Elephants, camels, sheep and other beasts and characters, all larger than life. It’s a major tourist attraction. I don’t know what the figures below have to do with Christmas, but it doesn’t matter. They are impressive.

Their names are Gaspar, Balthazar and Melchior, and they are reputed to be very Wise Men.

I READ RECENTLY that more people have heart attacks on Christmas Day than on any other day.

The holiday season is not welcomed by many folks. It throws them into a fit of depression. While it does not depress me, the entire month of December is my least favorite.

Christmas doesn’t interest me because I quit believing in Santa when I was 7 years old, and I’m not a Christian, so the religious aspect means nothing. I don’t think it means much to many people, but that’s another issue.

I’m gracious when people wish me Merry Christmas, but my heart’s not in it. Before I moved to Mexico, my favorite day of the year was January First because it’s as distant from the next Christmas season as you can get.

Alas, in Mexico the hysteria continues till January 6, which is Three Kings Day, and that’s when little Mexican kids get their presents, not on Christmas.

My attitude toward Christmas was always a source of much conflict with my second ex-wife who is as pro-Christmas as I am anti. December was painful in our home.

Today is January 1, 2017, a fresh year. I dropped my child bride off last night downtown so she could party almost to the crack of dawn with a mob of her unruly Mexican kin, something she did just a week ago for Christmas.

She’ll come home tomorrow nearly catatonic from lack of sleep while I’ll be fresh as the proverbial daisy.

A few hours prior to dropping her off, I was walking alone down the hill there in the photo. It’s one of our town’s best perspectives. A New Year’s gift to you.

Many thanks to those who give me feedback now and then. I appreciate it. May 2017 treat you well.