THIS MORNING, sitting at my computer, reading the news about 7 a.m., I paused to blow my nose. I’ve had a half-assed cold since Sunday.

My right nostril started to bleed … and bleed … and bleed. In a fast moment, it was like I was standing in a slaughterhouse watching the gutting of a hog. It was a torrent, and it would not stop.

After about ten minutes with paper towels and toilet paper, however, I did manage to control the inundation because it coagulated in my nose, and I had a ton of paper pushed up there.

My child bride and I drove to a clinic. An hour later I looked like this. There is lots of gauze up my nostril, and there it will remain till Friday. It’s not very convenient because, as mentioned, I have a cold.

I remember long ago that my mother told me my father had a similar situation one morning, bleeding profusely through the nose.

He was dead a year later.

The doctor prescribed a heavy dose of Vitamin K.

As if the cold weren’t bad enough, there is more.

As mentioned a few days ago, parts of Mexico are suffering a severe shortage of gasoline. Instead of getting better, it’s gotten worse. And, lucky us, it seems the problem is most severe in my state. 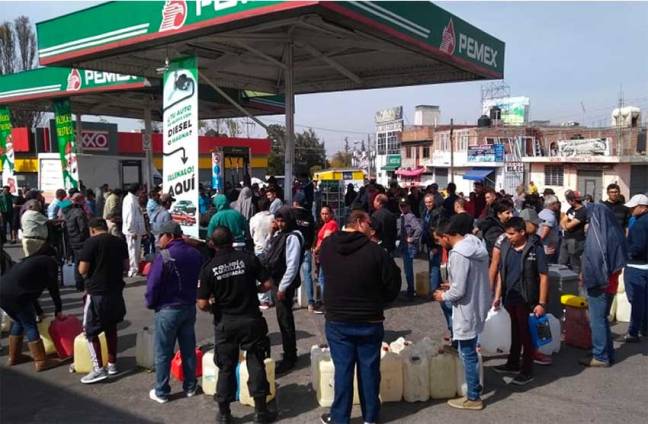 As we drove this morning to the clinic, we passed the Pemex station just up the highway, there was a line of cars at least a half mile long. I stole the above photo off the internet. I don’t know why they are standing there instead of being in their vehicles.

Not a good week hereabouts, neither for noses nor vehicles.

I wish we had bicycles.

I WAS LIGHTING incense with a stove torch in the living room yesterday, standing next to this. The sunlight from the big window was doing a swell job of illuminating.

I took a photo.

Cockfighting is alive and well in Mexico. You see fighting birds quite often while you’re out and about. Not fighting, but you see them, mostly in little roadside cages.

Or guys with cowboy hats and mustaches carrying them down the sidewalk or in the rear of pickup trucks.

I’ve been to a cockfight once, but it was in Puerto Rico 40 years ago. Don’t recall much about it. I likely was not sober. I do remember the covered arena, but not the fight itself.

I’ve also been to a bullfight once. That was in the Plaza México in Mexico City. As with the cockfight, once was enough. I have nothing against cockfights, however. Bullfights either.*

Chickens are dumb as rocks, and cattle suffer far more in slaughterhouses around the world. Toros in bullfights actually get a pretty good shake, as shakes go.

But the rooster theme is quite common in Mexico. In addition to this artwork of papier-mâché, you’ll see other roosters in the Hacienda. Lots of skeletons too.

* Never been to a dogfight. That would bother me.