That’s what they say about Mexico, and it’s wise advice. Tap water, that is. It’s been so long since I last drank tap water that seeing it done on Gringo TV now seems strange.

I began thinking of this matter yesterday while I was driving back from a small store down the street with two big bottles of purified water beside me.

We use a brand called Santorini, which is part of the Pepsi Corp. A large truck drives our streets regularly with these huge jugs, which are called garrafones in Spanish.

It’s like the five-gallon bottle used for water coolers in the United States, though I don’t know if our garrafones hold exactly five gallons. And they are plastic, not glass.

The driver and helper bellow agua in the street and also ring doorbells. I’m sure they earn commissions. If you respond to their yelling, they’ll bring the bottles right into your kitchen, and you hand over the empties.

A full bottle costs 25 pesos, which is about $1.30 U.S. these days. If you don’t hand over an empty, the price is way higher. I forget how much higher. I always have empties.

We once got door delivery, but you have to be home, and I found that doing it myself when we need it is more convenient. The store is just four blocks up the street.

Arriving home with the two blue bottles, I heave them into a wheelbarrow for the brief trip around the Romance Sidewalk to the Hacienda’s front door.

This routine is not very difficult, but I wonder how many more years will pass before it will be physically beyond me. Then I’ll have the guys bring it into the kitchen for a sweet tip.

People drink bottled water in America because it’s stylish. We do it here because it’s the smart thing to do. 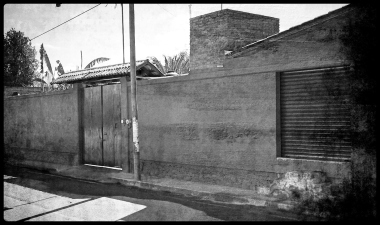 WHEN I LIVED in Houston, I did not sweep the street in front of my house, and neither did the city or anybody else. Yet it stayed clean, a phenom I cannot explain.

But here in my funky Mexican neighborhood — perhaps due to living on the area’s main drag — somebody’s gotta do it, and that somebody is me. I did it this morning.

It is a multi-step process. First, you rake. This collects the stuff that is not biodegradable, like plastic plates and beer bottles. I am not making this up. I live among slobs.

I toss this material into a trash can. Second, you sweep the sidewalk and street near the curb. This collects pure dirt and the occasional plant material. I put this into a bucket and walk past the sex motel next door, cross the street to a wooded area and let it fly. Dirt upon dirt.

What I never do is sprinkle. Those who live here know what I mean. The humorous but widespread practice of sprinkling water on the sidewalk or street. This is to keep the dust down, and it does that for the 10 minutes it takes until the water dries and you’re back to where you started.

Sprinkling accomplishes nothing useful, but everybody does it. Sometimes the sprinkle is allowed to just sit, but sometimes it is followed by a sweep. Of course, sweeping a dry surface is easier than sweeping a damp surface, but no matter. Everybody sprinkles.

You encounter odd doings in Mexico, but it’s not just the Mexicans who are odd. We have odd Gringos too.

A Yahoo forum set up by Gringos and that focuses on our area recently had some back-and-forth over full-house, water-purification systems, which are pricey.* Some folks take the old saw about “don’t drink the water” to extremes. This is understandable for newbies, but there are people who’ve lived here years who are still antsy about the water, needlessly.

My second ex-wife and I vacationed in Guanajuato in the early 1980s, and I recall that I showered in the hotel with my mouth clamped shut, and I brushed my teeth with bottled water. No way was I going to let my mouth come near Mexican water, which I knew was pestilential or worse.

I am to be forgiven because I was ignorant.

Here at the Hacienda, our tap water for years was spring water that was delivered in a tanker truck and pumped into our underground cistern. It looked very clear, but we did not drink it or cook with it. We used bottled water for that.

And then about three years ago, the neighborhood’s municipal system was upgraded, and we hooked into it. The water is nice, clear and lovely, but we still do not drink it. Perhaps we could, but I’ll let somebody else test it first.

This is how most Mexicans live. Tap water for most everything except drinking. Bottled water for drinking, and the bottled water is available everywhere, including home delivery from trucks that work the streets daily. I get mine from the Pepsi-Cola Company.

If tap water gets into your mouth while showering or brushing your teeth, just swish it about and spit it out. You will not die. I promise.

* Gringos move to Mexico and often cancel the considerable financial savings by insisting on bringing their American lifestyles with them. My advice: adapt. It’s cheaper and morally satisfying.