(Our guest poster today is the incomparable Dennis Prager who often guest posts on The Moon, unbeknownst to him. Were I to have a guru, I would choose Prager although he’s a bit younger than I am, and I don’t know if that’s permissible.)

On the contrary, many of us would argue that we are living in a particularly foolish time — a period that is largely wisdom-free, especially among those with the most knowledge: the best educated.

The fact that one of our two major political parties is advocating lowering the voting age to 16 is a good example of the absence of wisdom among a large segment of the adult population.

What adult deems 16-year-olds capable of making a wise voting decision? The answer is an adult with the wisdom of a 16-year-old — “Hey, I’m no wiser than most 16-year-olds. Why should I have the vote and they not?”

America has been influenced and is now being largely led by members of the baby-boom generation. This is the generation that came up with the motto “Never trust anyone over 30,” making it the first American generation to proclaim contempt for wisdom as a virtue.

Boomers are the first American generation to proclaim contempt for wisdom as a virtue.

The left in America is founded on the rejection of wisdom. It is possible to be on the left and be kind, honest in business, faithful to one’s spouse, etc. But it is not possible to be wise if one subscribes to leftist (as opposed to liberal) ideas.*

Last year, Amy Wax, a professor at the University of Pennsylvania Law School, co-authored an opinion piece in the Philadelphia Inquirer with a professor from the University of San Diego School of Law in which they wrote that the “bourgeois culture” and “bourgeois norms” that governed America from the end of World War II until the mid-1960s were good for America, and that their rejection has caused much of the social dysfunction that has characterized this country since the 1960s.

Those values included, in their words: “Get married before you have children and strive to stay married for their sake. Get the education you need for gainful employment, work hard, and avoid idleness. Go the extra mile for your employer or client. Be a patriot, ready to serve the country. Be neighborly, civic-minded, and charitable. Avoid coarse language in public. Be respectful of authority. Eschew substance abuse and crime.”

Rejection of bourgeois norms has caused much of the social dysfunction that has characterized this country since the 1960s.

Yet the left almost universally rejected the Wax piece, deeming it, as the left-wing National Lawyers Guild wrote, “an explicit and implicit endorsement of white supremacy,” and questioning whether professor Wax should be allowed to continue teaching a required first-year course at Penn Law.

To equate getting married before having children, working hard and eschewing substance abuse and crime with “white supremacy” is to betray an absence of wisdom that is as depressing as it breathtaking. It is obvious to anyone with a modicum of common sense that those values benefit anyone who adheres to them; they have nothing to do with race.

But almost every left-wing position (that differs from a liberal or conservative position) is bereft of wisdom.

Is the left-wing belief in the notion of “cultural appropriation” — such as the left’s recent condemnation of a white girl for wearing a Chinese dress to her high school prom — wise? Or is it simply moronic?

Is the left-wing belief that there are more than two genders wise? Or is it objectively false, foolish and nihilistic?

Has the left-wing belief that children need (unearned) self-esteem turned out to be wise, or morally and psychologically destructive? To its credit, last year, the Guardian wrote a scathing exposé on the “lie” — its word — the self-esteem movement is based on and the narcissistic generation it created.

Is it wise to provide college students with “safe spaces” — with their hot chocolate, stuffed animals and puppy videos — in which to hide whenever a conservative speaker comes to their college? Or is it just ridiculous and infantilizing?

Is the left’s rejection of many, if not most, great philosophical, literary and artistic works of wisdom on the grounds that they were written or created by white males wise? One example: The English department of the University of Pennsylvania, half of whose law school professors condemned Amy Wax and almost none of whose law professors defended her piece, removed a portrait of William Shakespeare (replacing it with that of a black lesbian poet).

Is multiculturalism, the idea that no culture is superior to another morally or in any other way wise? Isn’t it the antithesis of wisdom, whose very premise is that certain ideas are morally superior to others, and certain literary or artistic works are superior to others?

And the veneration of feelings over truth, not to mention wisdom, is a cornerstone of leftism.

*”The usurpation of the word ‘liberal’ by the left has been a catastrophe.” — Dennis Prager.

I RETIRED QUITE early, age 55, and that means you potentially have lots of years ahead of you, years in which you must do something or other.

My plans were few. I knew I’d use the time to read books. I like to read books because it’s an interesting thing to do, plus it makes me even smarter than I already am.

Not on the plan was yard work, which I dislike. My distaste for yard work was one of the reasons I recently had part of the Hacienda lawn filled in with stone and cement. That’s the lighter part in the photo above. The darker is the sidewalk, which is 15 years old.

But I’ve discovered that I’ve simply substituted one form of yard work with another. The stone and concrete require sweeping. The primary reason is that there are plants, big ones. One is the towering nopal, and the other is the monster bougainvillea.

I was out sweeping this morning when this realization came to me. It’s still yard work. However, sweeping stone and concrete is far more fun than fussing with grass.

I don’t regret the stonework. We intend to do more next year.

Back to the theme of retirement. Lots of folks dream of retiring early, which is a phrase open to interpretation. The standard “early retirement” is 55, and that’s what I did. Other people, mostly young ones, dream of leaving the work world even earlier. At 40, for example. Good luck with that, amigos.

Here’s what you usually have to do to retire early, say, at 55. Don’t go into debt. Save, save, save … and invest wisely. Being single can help. These are not difficult things to do, but few folks do them. It’s equally simple to lose weight. Eat less crap, and do regular moderate exercise. Again, easy, but few people can do it.

I’m having a fun time, and I’ve been having fun since 2000. Before that, not so much. One late afternoon recently, I was sitting here before the Hewlett Packard screen, and I looked out yon window. Below is what I saw. 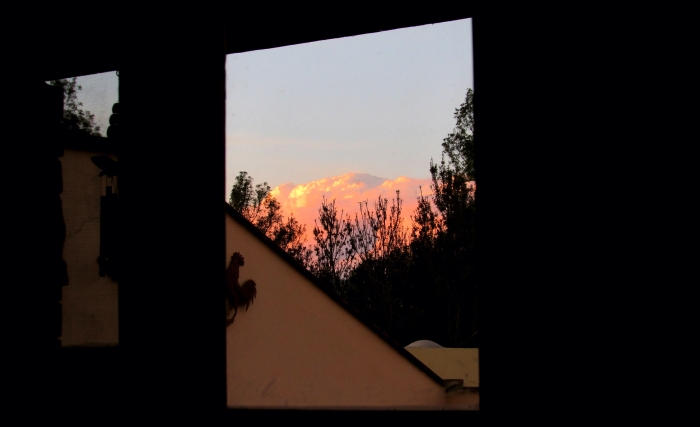